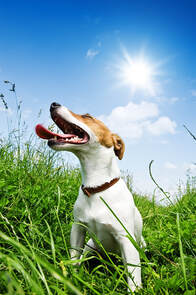 What is heartworm disease?
Heartworm disease is a serious and potentially fatal disease in pets in the United States and many other parts of the world. It is caused by foot-long worms (heartworms) that live in the heart, lungs, and associated blood vessels of affected pets. Heartworms cause severe lung disease, heart failure, and damage to other organs in the body.
Heartworm disease affects dogs, cats, and ferrets, but heartworms also live in other mammal species, including wolves, coyotes, foxes, sea lions, and in rare instances, humans. Because wild species such as fox and coyotes live in proximity to many urban areas, they are considered important carriers of the disease.

What do I need to know about heartworm testing?
Heartworm disease is a serious, progressive disease. The earlier it is detected, the better the chances the pet will recover. There are few, if any, early signs of disease when a dog or cat is infected with heartworms, so detecting their presence with a heartworm test is important. The test requires just a small blood sample from your pet, and it works by detecting the presence of heartworm proteins. If your pet tests positive, further tests may be ordered.

How is heartworm disease transmitted from one pet to another?
Adult female heartworms living in an infected dog, fox, wolf, or coyote produce microscopic baby worms called microfilaria that circulate in the bloodstream. When a mosquito bites and takes a blood meal from an infected animal, it picks up these microfilaria. Then, when the infected mosquito bites another dog or cat, or other susceptible wild animal, the infective larvae are deposited onto the surface of the animal's skin and enter the new host through the mosquito's bite wound. Once inside a new host, it takes approximately 6 months for the larvae to mature into adult heartworms. Once mature, heartworms can live for 5 to 7 years in dogs and up to 2 or 3 years in cats. Because of the longevity of these worms, each mosquito season can lead to an increasing number of worms in an infected pet.